Is there a better feeling than a much-deserved break after a long season of running?  I’ll answer for you: no there’s not.

There are so many benefits to taking time off after a season and yet so many runners neglect this super important piece of the training.  Whatever their hatred for a break might be, I’m here to tell all you runners out there that it’s really necessary to take some time away from running every once in a while.

Reasons to take time off after a season

Even as little as 4 consecutive days off will pay serious dividends to your long term running goals.  The longer the race (and season), the longer I suggest you take off.  For a season full of 5k’s, I’d suggest a minimum of a week to a maximum amount of time off of 3 weeks.  For longer peak races, like marathons and ultras, I suggest taking off two weeks minimum to 4 weeks, depending on how you feel.

Why runners don’t take time off

Not all runners like to take a break after their season.  The feeling of losing all of your fitness is both scary and unappealing to a lot of runners.  Knowing that you’re starting from “square 1” doesn’t make a lot of people feel right.  Like something is missing if they take a week off from running.  I get that, but remember: a week off of running doesn’t negate all of the running you have done.

Recapping why you should take time off after your season

You’re don’t become a beginner runner from a week off, you just get a bit out of shape.  When you allow yourself to get out of shape, your starting point will be higher than the last time you took time off.  This is how you get better!

A week off will not only allow you to recharge mentally and physically, but you’ll have time to take care of everything you’ve neglected to while you’ve been training.  Personally, there’s no better feeling than the first run back after a break.  The time off from running allows me to appreciate how lucky we are to be able to run in the first place. 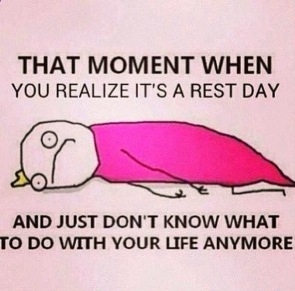 Who agrees?  Taking a break from running is one of the best feelings in the world – if it’s on your terms.

Want to be coached by someone who works with you and your schedule? Contact Marc

1 thought on “Taking time off after a long season”

Best of luck to every single marathon runner 🏃🏼‍♀️🏃🏽‍♂️who qualified for tomorrow’s Olympic Trials marathon 2️⃣6️⃣2️⃣! You all are an inspiration and I can’t wait to watch on 📺. The hills ⛰ of Atlanta are surprisingly difficult, so know that times might be slower than expected.
Want to feel fast on your run today?⠀ ⠀ Try pulling your heels up to your butt. It'll speed up your turnover and you'll spend less time on the ground.
Who has big goals like I do?⠀ ⠀ My head swirls with huge ideas that I want to accomplish. From camps to clinics, retreats to full-time coaching. I have all the wants in the world, but I also realize what reality is. ⠀ ⠀ My goals are posted on my blog (#linkinbio), but I'd love to hear what your goals are for 2020. Leave a comment with the goals you need some accountability with.⠀ ⠀ If they include running fast, please consider using #TrainwithMarc as your personal running coach.
Do you suffer from shin splints? One exercise I learned a LONG time ago was if I don't take care of my lower legs, they won't take me far.⠀ ⠀ Two times a week, I strap a band on and work on strengthening the little muscles in my feet and shins. I practice rotating my foot to get the top, back and both sides of my shins as strong as possible.
Great session with Nicole yesterday. She's coming a long way and has already dropped her 5k PR down to 21:57! So proud of all the hard work she's putting in.⠀ ⠀ Need a kickstart with your training? I can help you!
Motivated?⠀ Passionate?⠀ Driven?⠀ ⠀ Then execute. Don’t waste a second more. Go out and conquer all!